Defenders of the Realm an epic war game 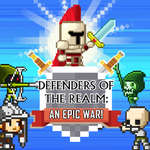 In DEFENDER OF THE REALM : AN EPIC WAR you must command and order your army of knights to defend your kingdom from monsters' attacks. Your enemy is rising an army with hordes of powerful creatures and magic spells, and just started to kill your people. Forge your defenses, build new units, battle against your foes to remain the king and save your realm from the deadly clash in this dark age.

How to play? Place your troops to defend the castle. The enemies are coming from the right side on one of the five lines.