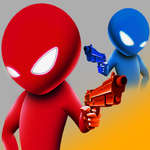 Drunken Duel is an entertaining western game with physics-based one-button control that can be played as two people and one person. In the game, two drunk rag dolls duel. You can hit the chance serial target by firing randomly, but you can lose by playing this way. It is possible to take more professional shots by mastering the physics of the game after a few games. The sounds and visual effects in the game make the game more fun.