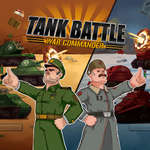 Command your army in epic battles in this new world war. It is a turn based strategy game where you are in command of tanks and other massive weapons to defend your country. Your goal is to conquer all the territories , and force the enemy to retreat, up to the final victory. You are the commander in chief. You must defeat the enemy that has invaded your nation and already installed its armed colony.

How to play? Follow the tutorial. Choose wisely your strategy and tactics to find the right balance between attack and defense. Every time you pick an attack or defense option, it is increasing your level experience for this weapon. This is how you are going to improve your troops and squadron in order to advance in the conflict zone.