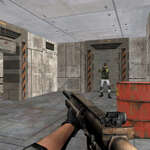 3D first person shooter. Take the challenge to invade the enemy captured territory and shoot all the guards one by one. Be quick otherwise they will fire back.